Definitley Autumn and not Winter

About 10 days ago they predicted the temperature at night would be in the low 30's, so I spent a day bringing in the plants that I winter in the house, dug out an asparagus plant that I'd promised a friend, and unhooked my hoses; ran out with my Xoom and took some final photographs of the garden.  While the temperatures were cold, we never got below 32 degrees.  A few plants look a little beat up, but nothing died, except for the few that may have died because it'd been 2 weeks since I'd watered!

All those beautiful plants that gave me such pleasure during the summer; I just couldn't stand it, so spent most of the day watering and deadheading (even mowed and watered the lawn) so that they could spend the last few weeks of autumn enjoying the sun and cooler temperatures and die not because of lack of care, but because of nature.
Being the queen of distraction, during the first round of the patio with the hose, I noticed the sun shinning through the leaves of the apricot tree on one cluster of yellow leaves, definitely a Canon moment!

I also photographed a leaf that had landed on my succulents (and a few others, just haven't played with them yet).
It could be called multitasking, I kinda think of it as being easily distracted, but while the sprinklers were running and before the deadheading (with the alarm set so I wouldn't forget that I was watering) I played with textures and clipping masks and kind of like the results.
I find that I ramble, but I want to quickly get back to the photo's with taken with the Xoom.  I chose the Motorola tablet over the iPad for my own weird reasons, but I'm pleased with the Xoom.  I was disappointed that Android does not seem to have the graphic addons that Apple does; but I kept checking, and had been thinking that I'd buy the iPhone when it is time to renew my mobile contract. THEN all of a sudden I found that Android now has a mobile photoshop app and Motorola will be introducing their new Droid next week, which is as seamless as the iPhone.
Anyway, having been envying everyone who is into  iPhone/iPad photography, I was pleased with the photo's that I took with the Xoom, and the photoshop app that I was able to apply tho them. 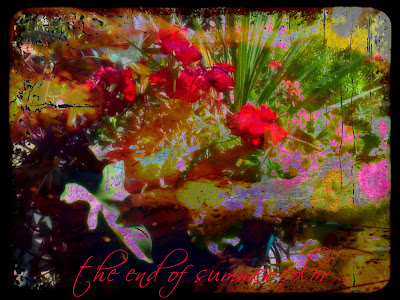 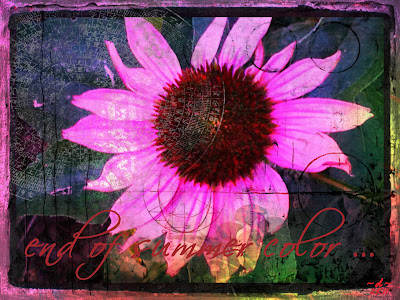 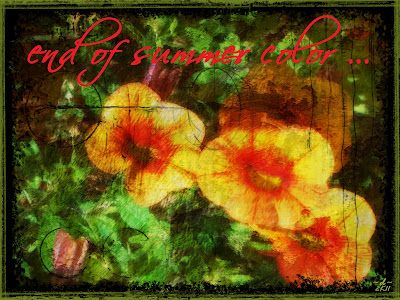 Got started working on rendereng a calf photo after viewing  the calf painting, and guess what, it is really hard to make a calf look romantic, soft, cuddly, enticing, interesting!  Love looking at them when I'm at the ranch, love photographing their beautiful little faces, but something definitely gets lost in transition!  Maybe I should have used one of the action shots of the grandkids roping, or the calf being branded or just one of the many adult children and friends who participate in the day long branding, but no . . . I wanted a calf!
Actually, the photograph is quite endearing and was actually used in a coffee table book about the ranch, maybe I should have used a black background?
Second try wasn't much different, and is of several calves in a holding pen. The red bull is called "Corn Bull" at the Carson Ranch, and this was the first year that I actually saw Corn Calves!  You'd have to know New Mexico politics to understand the humor, and really, it is quite funny, and has become a good Carson family joke!
I added the crow and rick-rack for interest . . . didn't help much.  I will say though that going down to the ranch is a joy for me; I adore the whole Carson Clan, and consider them extended family.  The painting that was commissioned is going to be gorgeous hanging in the ranch house.  Don't think I'll mention my renderings though, I definitley don't want to become the brunt of a family joke!

Having had the calves become an artistic challenge (failure?) I opted to start another piece for Nancy Donaldson's texture challenge.  Because I have plenty of time to work on it, I'll probably end up with several, but this is what I did this morning in an attempt strengthen my artistic endeavors.

Wish I could take credit for the photography, but getting into a field of the little fall flowers would have me wheezing and sneezing for days!  We do have a park in Santa Fe called Frenchy's Field, named after the farmer who gave it to the city for a park, just down the street from my home.  It was glorious this fall, and looked so much like the photo above, but I only admired it from afar; everytime I thought about grabbing my camera, my nose started running!  Alas, the photo of the field of flowers and the white pumpkin are from stock.xchng.

Thought for the day:  I am grateful for all the people who have become such an important part of my life, whether knowingly or not.
Posted by Deborah at 6:04 PM

Being an early riser, and anymore managing to stay up long after my usual bedtime, I am able to "play" a lot with my graphics program.  Actually, sometimes I find it a little embarrassing that I seem to be so prolific; #1 it leads me to think, maybe I'm not putting enough time and energy into the pieces that I create, #2 it makes me wonder if there isn't something more meaningful that I should be doing, like working in the garden, cleaning house, being more social, or whatever . . .
But when it comes right down to it, I enjoy what I'm doing and I give thanks that I do have the time and energy and the curiosity to learn and grow my new endeavor.  Besides which, summer is gone and although I have a beautiful yard, I never did like bedding down the gardens for winter, and I have always hated housework, and I've never been overly social!
I give thanks that I have this time to "play" and enjoy the bounty of my creations!


Last evening and this morning I played with a portrait of my sister from a photo that I'd taken on her Birthday last August . . . sort of a Warhol look, but then maybe I'm giving myself to much credit.  I doubt if I'd ever be able to repeat it, 'cause I was messing around and not exactly sure what I did.
My next project was inspired by a sculpture artist who has several outdoor pieces in Santa Fe of ravens (sound so much more romantic then crows) sitting on top of apples.  I love his work and at one time had made a soft sculpture mimicking his sculptures; the results were disastrous.  Maybe that is why I enjoy digital art so much . . . it is so forgiving!

I'm looking forward to this evening and what I may be inspired to do.  A friend recently had a painting made from one of the many of my photographs taken at his ranch (have a thing about calves and the trillion photo's of them); maybe I'll attempt to create a painting from one or two of the ranch photo's . . . and see where it takes me.
I give thanks for my life and for the world in which I live.
Posted by Deborah at 5:26 PM

I recently participated in a "Texture Challenge" hosted by Nancy Donaldson, using a texture that she had created from a encaustic painting that she had done; had fun not only doing the piece, but actually participating in something that was to be posted on her blog, all pulped out.

Visiting and viewing my work on Nancy's blog this morning, inspired me to look at some of her links, which took me to Kim Klassen Cafe.  Kim hosts a {Texture Tuesday}, and this weeks challenge was Red eDition, using one of her textures.  NOW I'm getting braver, read ALL the instructions on how to post to her site, photographed one of my many red geraniums, and walla, I again posted one of my pieces.


Liking being so brave, I decided what the heck, I'll start a blog and see where it takes me, and here it is!

Thought of The Day:  Working at home in sweats means I don't get out and spend money!
Posted by Deborah at 5:27 PM